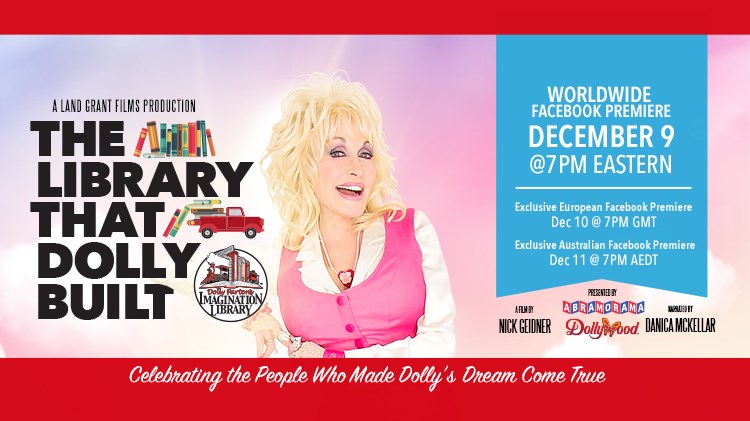 LIVE PREMIERE OF DOLLY PARTON’S
THE LIBRARY THAT DOLLY BUILT

Celebrating the People Who Made Dolly’s Dreams Come True

IN CONVERSATION WITH,
AND ACOUSTIC PERFORMANCE BY DOLLY PARTON

The Yamhill Enrichment Society (YES)  and The Dollywood Foundation are presenting a free one-night-only live streaming world premiere event for The Library That Dolly Built, a behind-the-scenes look at Dolly Parton’s Imagination Library. Originally scheduled as a nationwide live event on more than 300 screens this spring, the world premiere for The Library That Dolly Built has been reimagined as a free live stream screening of the film, exclusively on Facebook, available nationally TODAY –  Wednesday, December 9 th at 4pm PST.

The screening wil be followed by a conversation with, and live acoustic performance, by Dolly Parton. Viewer can tune into the live screening and conversation on FB.ME/dollysimaginationlibrary and ImaginationLibrary.com.

Dolly Parton said, “I am so excited that we can finally tell the whole story of the Imagination Library. It is certainly not just about me. Our story is the story of children, of families an communities who all share the dream to inspire kids to love to read and to love to learn. My hope is this documentary will encourage more towns, more states and even more countries to jump onboard. One thing is for sure, I think this is the best investment I have ever made!”

The Yamhill Enrichment Society (YES) is the local affiliate for Dolly Parton’s Imagination Library and has mailed over 160,000 books to Yamhill County Children since 2014.

Please consider donating to YES to support Yamhill County Imagination Library!  Every $25 you donate provides a year’s worth of books to one Yamhill County child.

Transforming the lives of Yamhill County children through literacy and music enrichment.